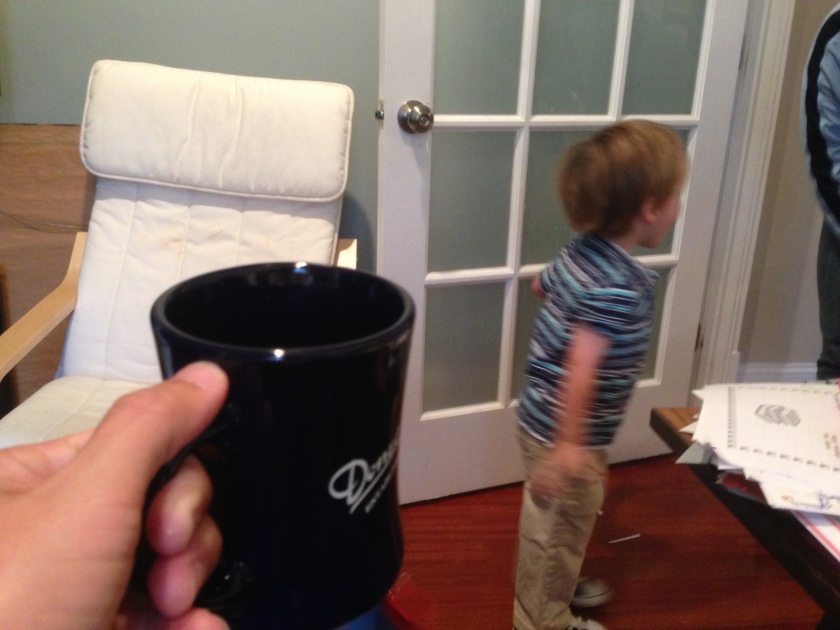 I woke at 5:00, nudged AMKT, and asked if she planned to work out this morning. She usually leaves the house around 4:30 or so in the morning to exercise, while I stay at home and work on my manuscripts while the boys sleep. If AMKT decides not to work out, though, I’ve started driving to my office to work there until around 6:30. That’s what I did today, spending an hour drinking coffee and annotating chapters on the couch in my office while the sun came up. Then I came home, woke EJT, took him to school, then went back to the office to prep for my 9:15 class. I thought to myself, “I’m the first to get to the office, and the first to leave, and the first to come back to the office a second time. And it’s not even 9:30.”

I posted grades for three productions. By the end of December I will have graded 167 video productions. Miles to go before I sleep.

I had a nice conversation with a couple students today about the Family Guy/Simpsons episode. One of the perks of my job is I get to talk about media with people who share my interests.

After lunch I picked up EJT and Addison from pre-school and drove them home. On the way they sang “The Alphabet Song” and “Twinkle Twinkle Little Star.” Then I made my third trip back to the office.

I talked with the president of the High Point Broadcasting Society today about this weekend’s 48 Hour Film Festival. I’m serving as a judge.

At 4:00 I took my class to hear Eason Jordan (formally of CNN) give a lecture titled “Heroes, Despots, Lunatics and You.” I asked him if broadcast journalists were heroes, despots or lunatics. He said there were unfortunately few heroes among broadcast journalists, and that many of them need to get over themselves.

I met AMKT and the boys for dinner at Rome Pizza, then went back to work to work on my manuscripts before leaving work for good for the fourth and final time today around 7:30. Then I put CKT to bed, took out the trash, ran a load of laundry, and composed today’s Daily Accomplishments.